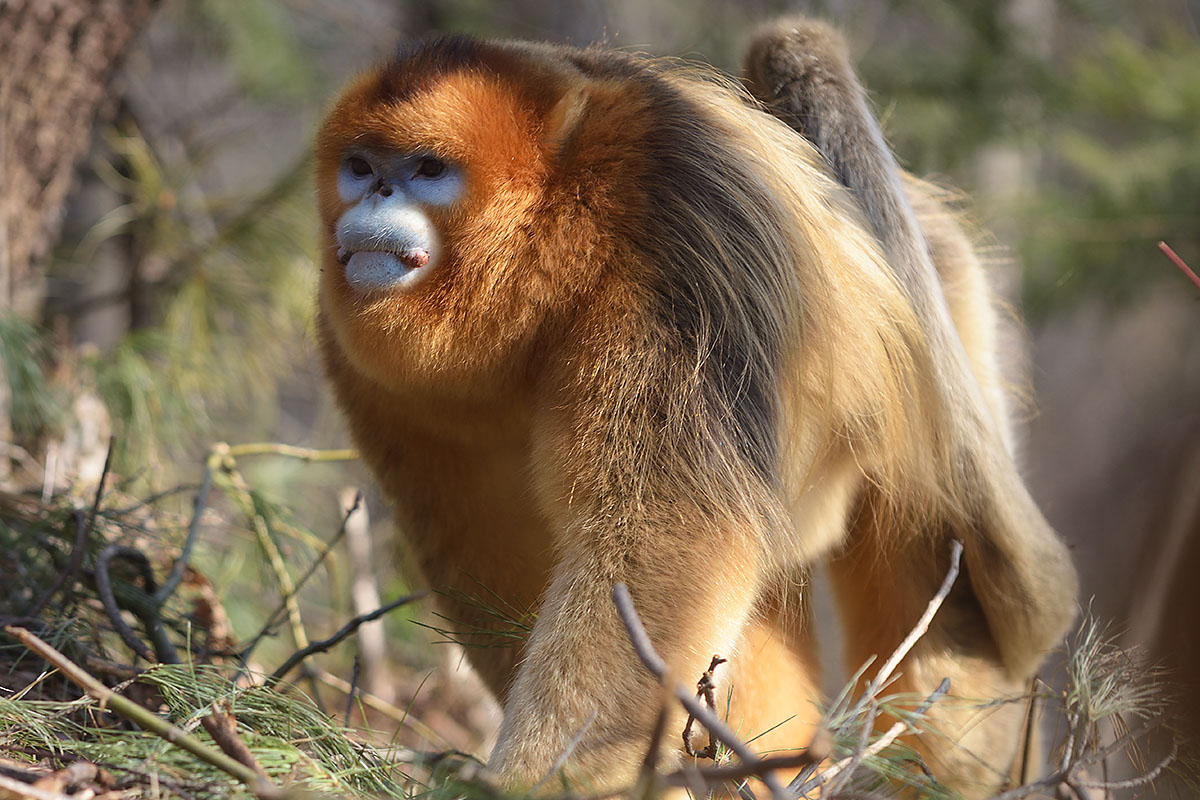 To me, Golden Snub-nosed Monkeys are one of the most amazing looking mammmals on earth... particularly the adult males. The combination of beautiful thick golden fur, bright sky-blue face, cute snub-nose and strange lappets protruding from the side of the mouth takes some beating. To add to this, like most monkeys they are intelligent, resourceful and mischievous, which only adds to their charm. Unfortunately they are also classified as an endangered species found only in the mountains of central china and threatened with habitat loss. 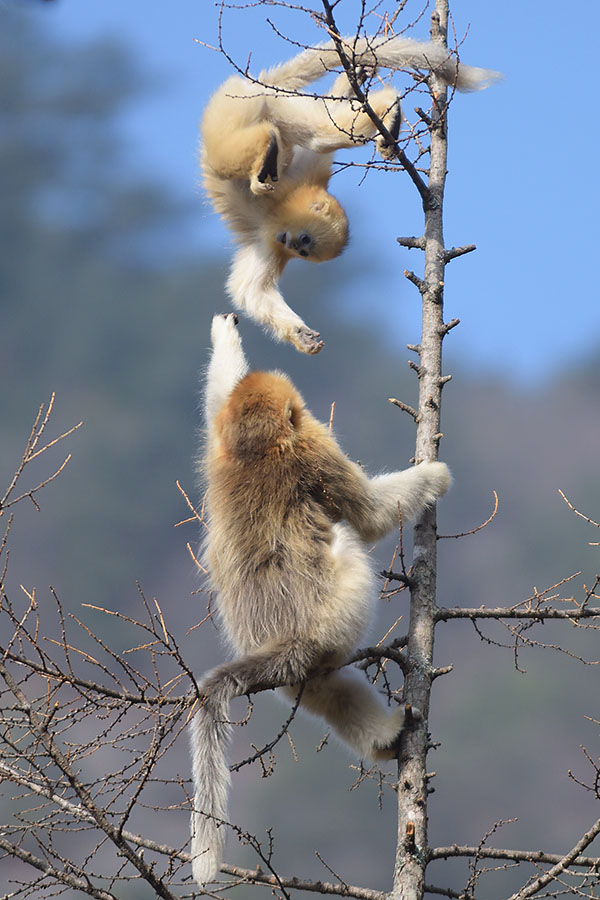 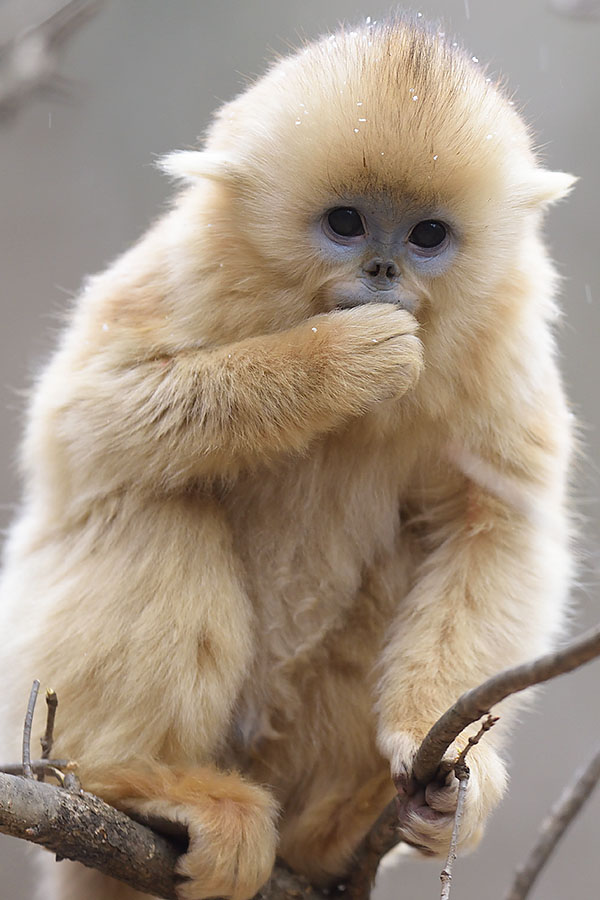 Cute baby feeding in a tree 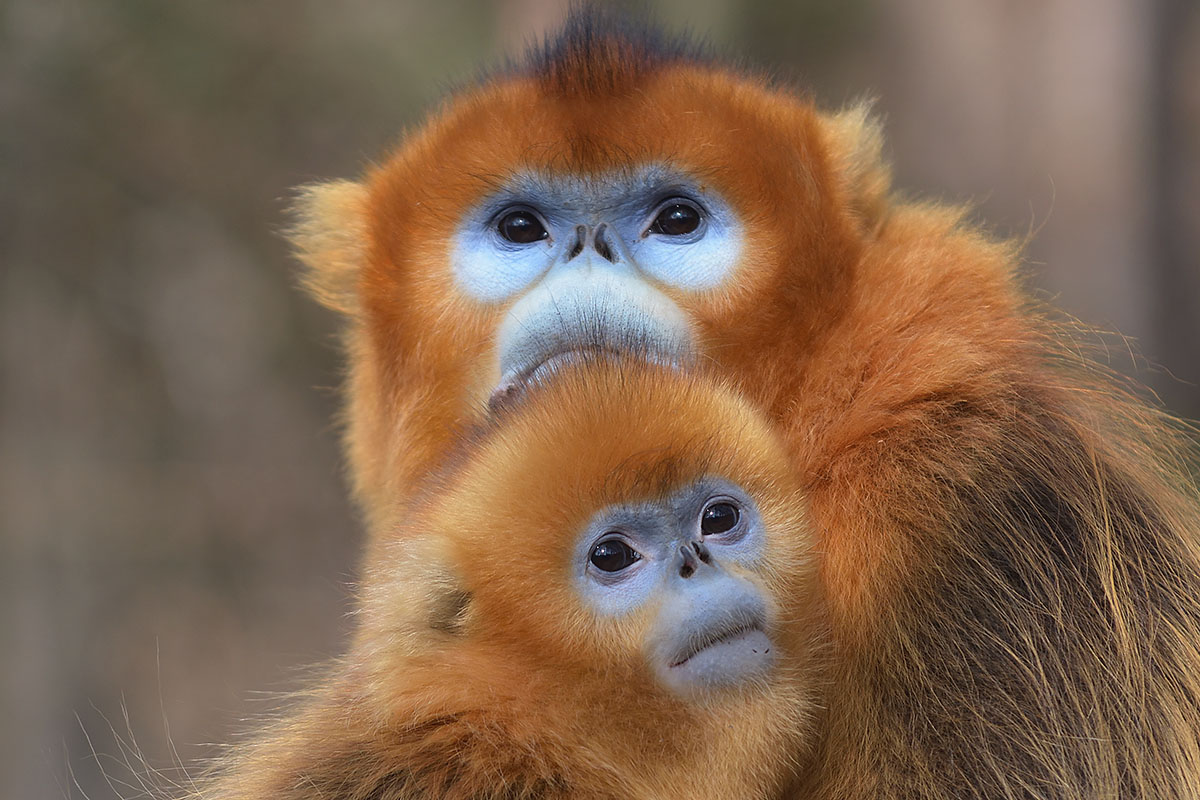 Mother with her youngster

To photograph Golden Snub-nosed Monkeys, I arranged a visit to Foping National Nature Reserve with Sid Francis of Sichuan Birding (http://sichuanbirding.cloudaccess.net/) who probably knows the wildlife of central China better than anyone. However, despite the prospect of seeing one of the strangest looking mammals in the world, I had reservations about my trip. We were going to a research station where Chinese scientists are studying the behaviour of the Golden Snub-nosed Monkeys called Monkey Valley. In order to carry out their studies, the scientists feed the monkeys with corn and apples twice a day and mark them with coloured dye to tell them apart.


They are still wild animals free to move off into the forest whenever they want to, but in practice the troop just stays permanently around the camp and has become completely habiutated to the presence of humans. This of course makes them very easy to photograph, but I have to admit to having concerns about the effect on their natural behaviour and taking photos certainly didn't give me the same satisfaction as tracking wild Red Panda and Wolves. Having said that I had to agree with Sid that it's a lot better to have local people feeding the monkeys than eating them. (... more on that subject in the next report.) 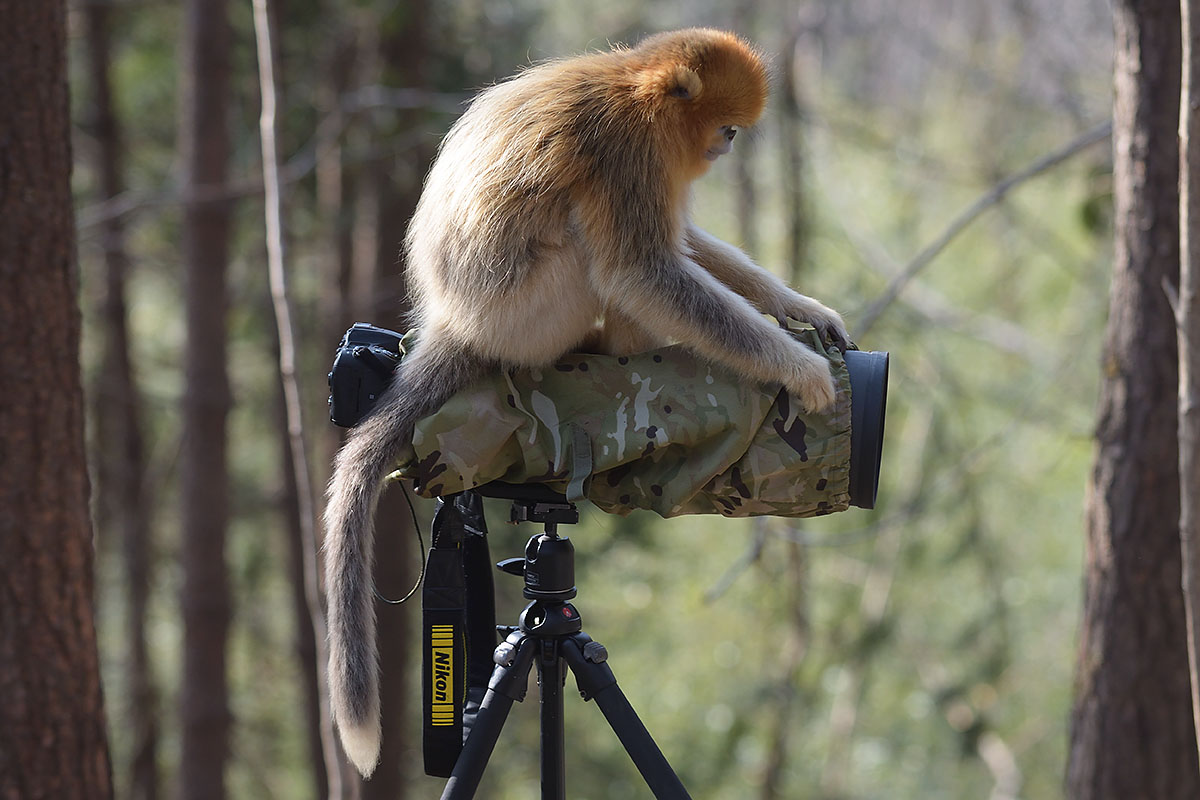 A young monkey investigating my camera 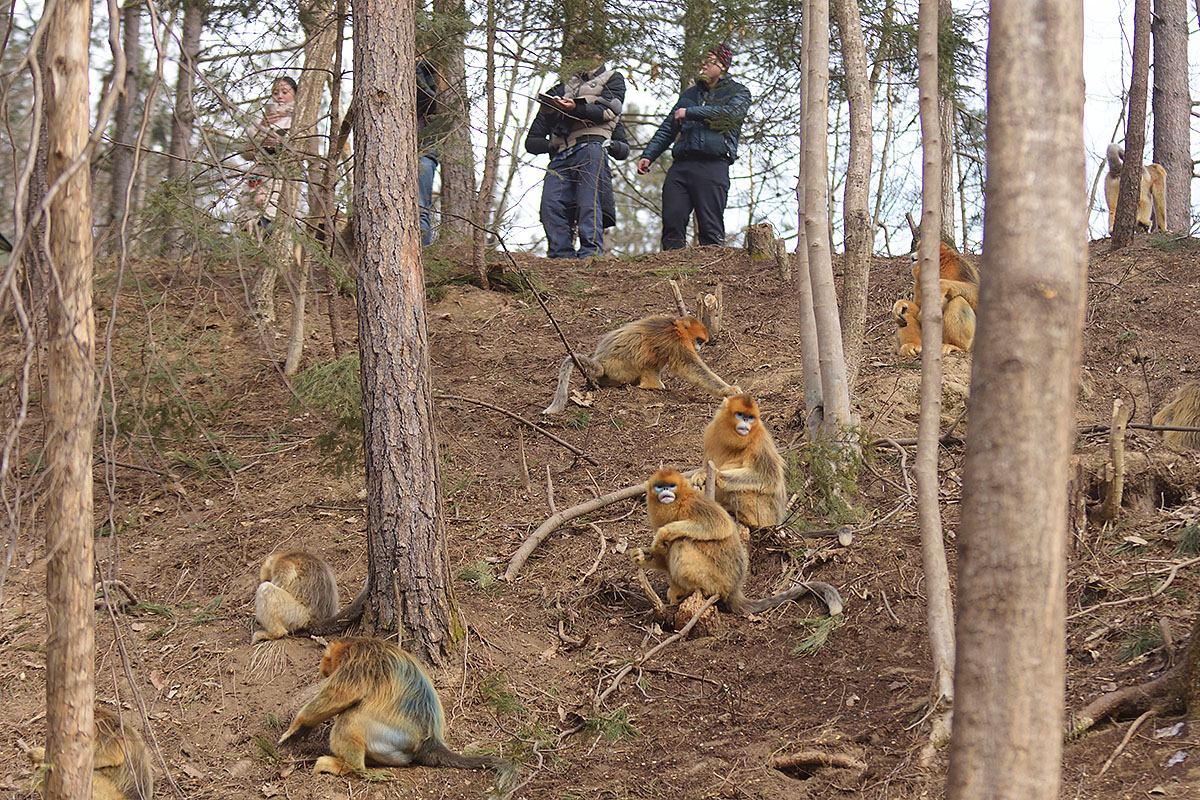 Scientists making notes on the monkeys while they feed.


In the end, I'm very glad I visited Monkey Vally. My equipment managed to survive the various attacks it suffered at the hands of the monkeys and I'm happy with the final photos. I also enjoyed the time spent watching these amazing creatures interacting with each other. I can't help thinking it should be possible to study wild animals without changing their behaviour, but at least while this research station exists there's no risk of Golden Snub-nosed Monkeys dying out through ignorance of their existance as is happening with so many other animal species around the world.

Thanks to Sid for arranging the visit to Monkey Valley and the rest of my trip to Central China, more details of which will appear in the next report. 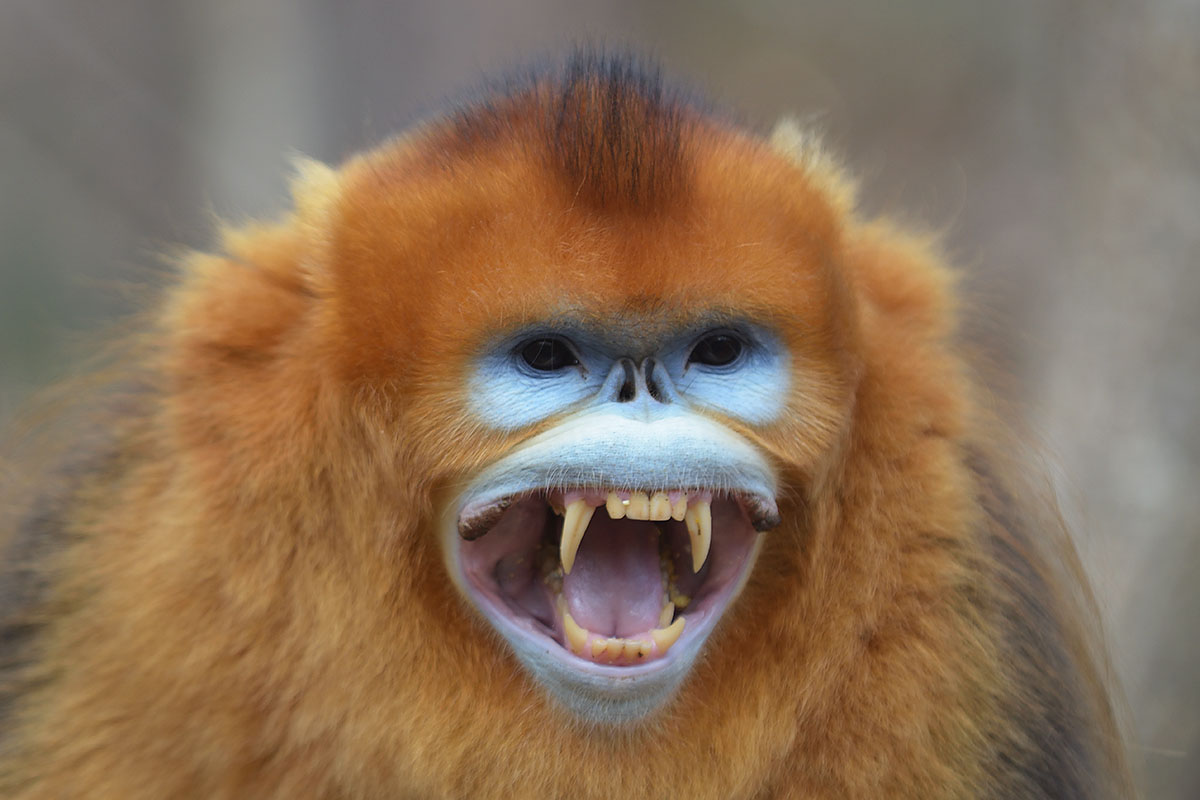